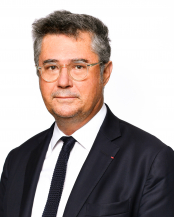 Olivier Bohuon joined EW as Senior Advisor in the London office in 2018 and has extensive international healthcare leadership experience with a number of pharmaceutical and medical device companies in Europe and the United States.

He currently serves as the Chairman of the Board of Directors of Laboratoires Majorelle.

Prior to joining EW, Mr. Bohuon retired as CEO of Smith & Nephew (NYSE:  SNN), a leading global medical device company headquartered in London and part of the FTSE 100 Index.  Mr. Bohuon was well-known to EW Healthcare Partners as a result of its portfolio company, Bioventus, which was spun out of SNN, with SNN retaining a 49% stake.

Before joining SNN, he was the CEO of the Pierre Fabre Group, a private multinational pharmaceutical company headquartered in France. And prior to Pierre Fabre, he spent ten years with Abbott Laboratories ultimately as Executive Vice-President of the Abbott Corporation and President of its pharmaceutical division. During his career with Abbott, Mr. Bohuon also served as the group’s President for European operations as well as President of Abbott International. Previously, he also held commercial leadership positions at GlaxoSmithKline as Senior Vice President and Director for European Commercial Operations.

Today Mr. Bohuon is an external director at Takeda Pharmaceutical, one of the leading global specialty pharmaceutical companies with a $50B market cap. He also serves as a Board member of Virbac Group SA and Non-executive Director of Reckitt Benckiser Group plc. Mr. Bohuon is also a Member of the French National Academy of Pharmacy and a Member of the French Technology Academy.

Originally from Paris, France he received his Doctorate in Pharmacy in 1983 from the University of Paris XI, and his Master’s degree in Business Administration from École des Hautes Études Commerciales (HEC) in Paris.  He was awarded Knight of the Legion d’Honneur, the highest French order of merit for military and civil merits, an order originally established in 1802 by Napoléon Bonaparte.