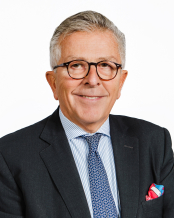 Lamberto Andreotti joined EW as Senior Advisor in the New York office in 2017 after a long and successful career as a senior executive in the pharmaceutical industry, most recently as Chairman of Bristol Myers Squibb (BMS).

Mr.  Andreotti first joined BMS in 1998 as Vice President and General Manager of European oncology and Italy, and advanced to President, Europe in 2000, President, International in 2002 and President, Pharmaceuticals in 2005. He became Chief Operating Officer in 2008 and was elected to the Board of Directors the following year. He was appointed CEO in 2010, and ultimately appointed Chairman of the Board in 2015 and retired in 2017.

Originally from Rome, Italy, Mr. Andreotti received his Bachelor’s degree in Engineering from Università La Sapienza of Rome and his Master of Science degree from the Massachusetts Institute of Technology.