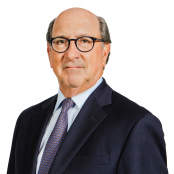 Bill Hawkins joined EW as Senior Advisor in the New York office in 2017.  Mr. Hawkins brings to EW decades of experience across a number of healthcare companies including as the former Chairman and CEO of Medtronic.

Mr. Hawkins was at Medtronic from 2002 until 2011. After retiring from Medtronic, he served as President and Chief Executive Officer of Immucor, a private equity backed global leader in transfusion and transplant medicine from October 2011 to July 2015.  Prior to Medtronic, Mr. Hawkins served as President and Chief Executive Officer of medical device company Novoste Corporation, where he led the development of the company’s innovative vascular brachytherapy products. Previously, he held senior leadership positions at American Home Products, Johnson & Johnson, Guidant Corporation and Eli Lilly & Company.

Mr. Hawkins received his Bachelor degrees in Electrical and Biomedical Engineering from Duke University in 1976, and a Master of Business Administration degree from the Darden School of Business, University of Virginia, in 1982.