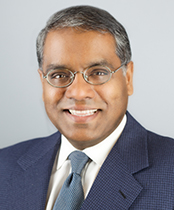 Mr. Thangaraj has 20 years of experience as a seasoned investor in operations, venture capital and growth equity opportunities.  He began his career at ARCH Venture Partners (“AVP”), a venture capital firm which makes early stage technology and healthcare investments.  During his tenure at AVP, he managed one of its portfolio companies, HealthQual, a medical information company, until its sale to Nellcor, a large hospital supplies company.  He left AVP in 1995 to run a start-up telecommunications services company called Integrated Telemanagement, which was later sold to Cam-Net Communications.

He previously served as the Co-Chair of the Council of the Booth School of Business and the Visiting Committee of the College, both at the University of Chicago.  He is also the former Chairman of MAP International.

Mr. Thangaraj holds both a Bachelor of Arts degree and a Master of Business Administration degree from the University of Chicago.