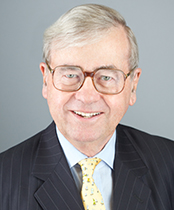 Mr. Carmany began his career in finance as an officer of Bankers Trust Company. He subsequently joined the American Express Company, holding senior positions at the corporate level, and as a Senior Executive Vice President of its international banking and private wealth management subsidiaries.  He currently serves on the Board of Directors for EW portfolio company, BreatheAmerica.  He is also Director of the Macquarie Infrastructure Company, and has served as a Director of Sun Life Financial, Inc., and as an advisor to Brown Brothers Harriman and EnGeneIc Ltd., a biotechnology company in Sydney, Australia.

He has over 25 years of experience in healthcare, commencing with his Chairmanship of the New England Medical Center, where he led its merger with Lifespan, Inc. at the time creating the third-largest healthcare system in New England.  He served as Vice Chairman of CMS, Inc., a manufacturer of software used in the delivery of radiation therapy, which was sold successfully to Elekta; and as CEO of Helicon Therapeutics, a biotechnology company founded by the Cold Spring Harbor Laboratory, Roche Pharmaceuticals, and OSI Pharmaceuticals. In addition to his chairmanship of the New England Medical Center, he is a member of the Advisory Committee on Education of the Harvard Medical School,  a past Chairman of the Board of Associates of the Whitehead Institute, and is a former Trustee and member of the Executive Committee of Bentley University.

Mr. Carmany is a graduate of Amherst College, which has awarded him both its Distinguished Service Award and Medal for Eminent Service.