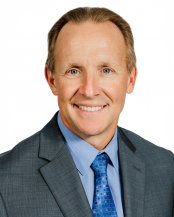 Bob White joined EW as an Operating Partner in 2019 after nearly 30 years leading early-stage companies and Fortune 500 business units in the medical technology sector, including most recently as President and CEO of Entellus Medical, an EW portfolio company acquired by Stryker.

As mentioned, prior to EW Mr. White was President and Chief Executive Officer of Entellus Medical, driving the business to treat over 250,000 patients suffering from chronic sinusitis, Eustachian tube dysfunction and airway obstruction.  In 2018 Mr. White was recognized as a finalist of the Ernst & Young Entrepreneur of the Year and he received the YPO Global Innovation Award.

Prior to Entellus, Mr. White was the President and Chief Executive Officer of TYRX, Inc. which specialized in commercializing innovative, implantable combination drug and device products focused on infection control until TYRX was acquired by Medtronic in 2014.  Along the way, in 2012, TYRX was named to the Fierce Medical Devices “Fierce 15”, designating it as one of the leading medical device and diagnostic companies.

Mr. White holds a Bachelor of Science degree in Aerospace Engineering from the University of Missouri-Rolla and a Master of Business Administration degree from Cornell University.